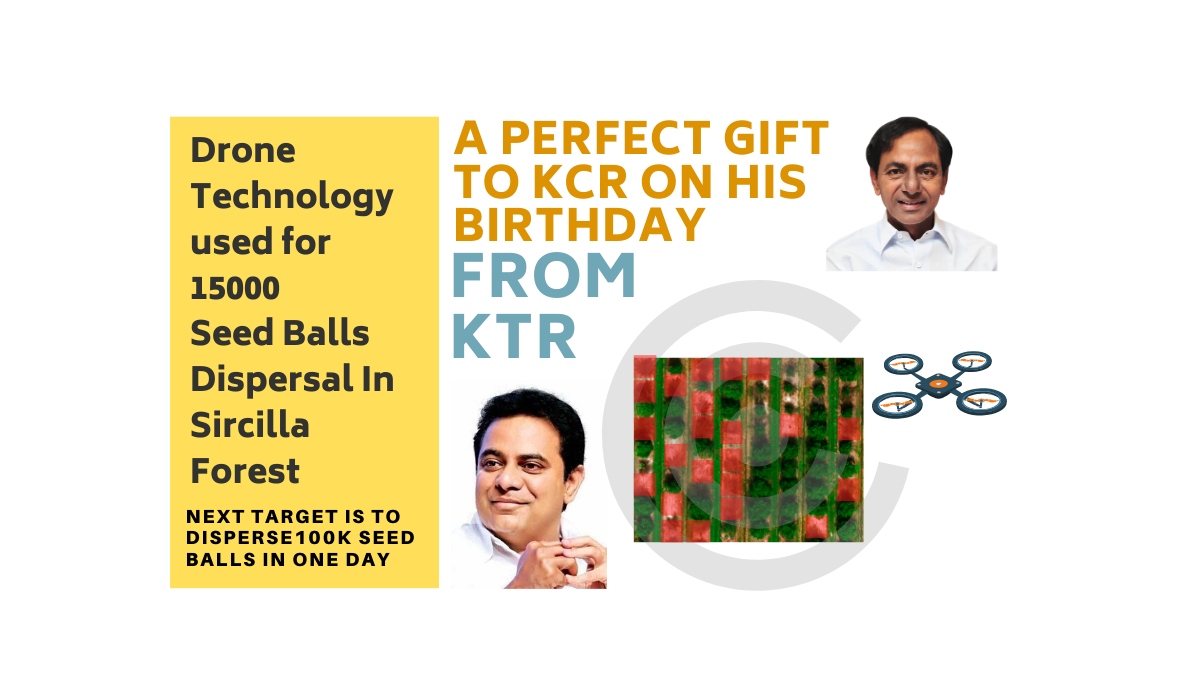 A perfect gift to KCR on his birthday from KTR

If there is an award for the effort towards afforestation on Chief Minister K.Chandrasekhar Rao’s 66th birthday on Monday, Marut Drones will emerge as a strong contender for the same.

The start-up company in drone technology applications, together with the Forest department, has attempted dispersal of 15,000 seed balls in the forests near Veernapally village of Rajanna Sircilla district in a single day. They have performed the feat through a custom-made drone flying at a height of 40 to 50 feet above ground, which they say is a pilot effort. “We have designed the drone especially for seed ball dispersal, and equipped it with a carrying capacity of 400 balls, which could be bombed into the area at the rate of one ball per second,” shared Prem Kumar Vislawath, CEO and Founder of Marut Drones.

It took a seven-month effort to design the prototype since the company received a requisition from the Environment and Forests and IT departments. The idea was said to be the brainchild of Minister K.T. Rama Rao who represented the Sircilla constituency. While the seed ball technology is not new, the method used to distribute them in a forest area is, says Mr.Vislawath.

As part of Telangana Ku Haritha Haaram programme, the Forest department had already attempted barren hill afforestation by way of seed ball dispersal through manual means. However, it was proven to be largely ineffective, as the seedlings sprouting from the seed balls became victims of cattle grazing.

Seed balls are prepared using red soil, cow dung, cow urine, chickpea flour, and jaggery, into which one or multiple seeds are ingrained based on the size. They have a year’s time till germination, hence could be dispersed much before actual monsoons, say officials.

For drone dispersal, seeds of forest variety Ficus (Raavi, Marri, and Juvvi), Seetaphal, Wood-apple, Seema Chintha (Pithecellobium dulce), and Beechwood were used, which are hardy varieties and can survive with very little water, they said.

An effort was made to record the coordinates of where each seed ball hit the ground. The information will be processed to a geotag them, says Mr.Vislawath, adding that his next target is to disperse one lakh seed balls in a day. Costing ₹8 lakh for designing, prototyping, and automation, the exercise was done free of charge for the government.

This story first appeared on The Hindu News Feed without any modifications to the text. Only the headline has been changed.