BlogAgri NewsSanjiv Puri, MD of ITC: 50% of India is in agriculture with hardly any contribution to GDP 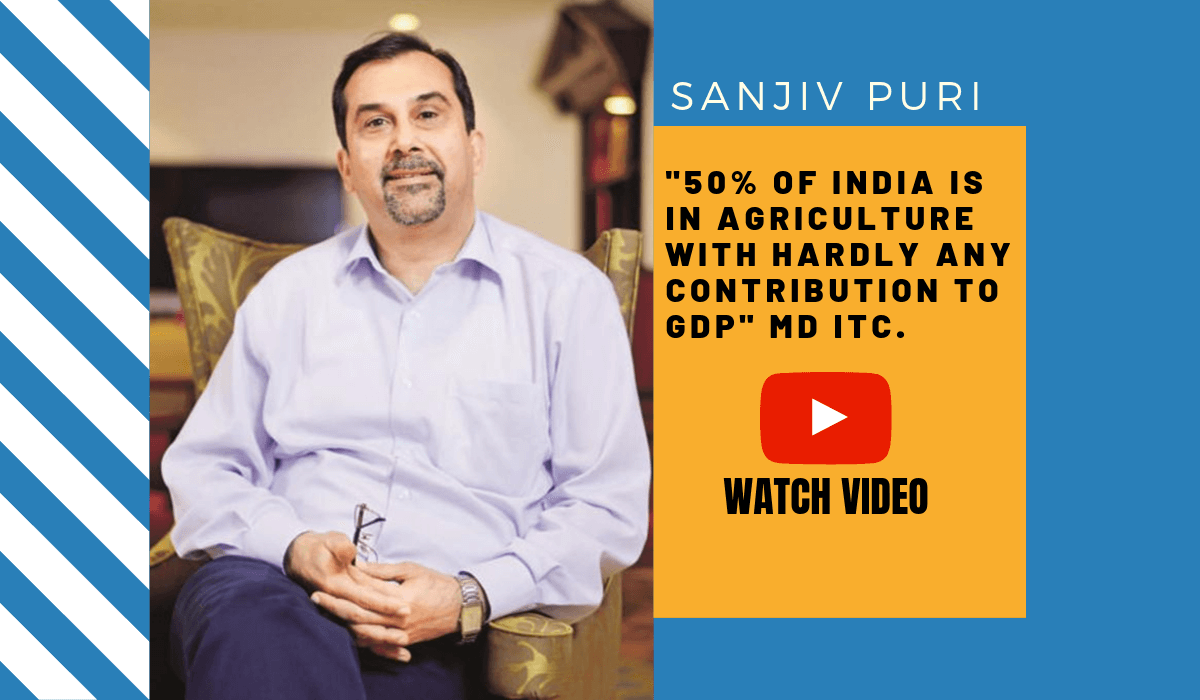 Sanjiv Puri, MD of ITC: 50% of India is in agriculture with hardly any contribution to GDP

50% of India is in agriculture with hardly any contribution to GDP; growth will be sustainable when the focus is given to agriculture, says Sanjiv Puri, MD and Chairman of ITC.

Welcome back! Let’s get you more voices from corporate India – Ithaca Saxena caught up with Sanjeev Puri, the Chairman and Managing Director of ITC on the sidelines of the jury round of the 15th India business leader Awards. Kritika began by asking him about the demand expectations and credit growth expectations ahead of the festive season.

There is a slowdown that is fairly wide and it has been so far in the recent past. The exact assessment of the impact of the festival would only unfold over a period of time because pre festival is the time and stocks get available to the trade and the replenishment will actually tell us the velocity.  I think we’ll have to give it some time. But we need to keep in mind that given the lower levels of per capita consumptions and the penetration levels in India as also some of the measures that have been taken and as also the you know the monsoon has not be has been relatively favourable. The soil has sufficient moisture for the next crop itself.  I think these are some of these signs over well for the future and of course India is a growth market; India is a consumption market. So sooner than later, consumption is bound to pick up and whilst, we do see slowdown which is fairly wide today. We are certainly optimistic of the future.

What would you make of the initial bit of festive activity that has come in in the last three weeks or is it too early to say about how festive season will be this year versus last year?

I I would I would say it’s too early to assess. Because we should we should give it till the end of the month really assesses what is the impact.

To prepare yourself how long would you give yourself? Say by the end of the year or beginning of next year for us to see a turnaround in the demand cycle?

Well, it is difficult to predict when it will start turning around. Well, as I said you know some of the factors are turning favourable and even the government has has announced that will be up fronting capital expenditure. Now all these will boost consumption. So it should start turning around sometime in the future to lay a hand exactly it’s a little difficult. It just would be a wild guess.

What do you make off the government’s recent moves are are specifically the corporate tax cut now? What is the kind of benefit that have you been able to quantify that for yourself so in terms of the near term benefit that you will get ?

Well, see the whole growth in the economy has to come on a virtuous cycle of investments, growth, employment, export that’s the kind of cycle that should become virtuous. Now, the change in the corporate tax enhances the competitiveness of India, makes the viability of projects even better. So I do believe that it offers well and going forward it’s going to be a provide some booster to the investments in the economy for short. It is not something that one can expect that will change things overnight, but it will over a period of time. I’m sure create more investment and therefore help improve the economy.

Alright. That’s the word from Sanjeev Puri. Let’s get to another corporate voice coming in. Reethu caught up with MD of HDFC bank who expects a better quarter than the one that went by. He also adds that semi-urban and rural demand is very buoyant.

When we launched it I told you we were very optimistic. The results have exceeded our expectations. So we are seeing a substantial uptick across multiple segments and we do believe this quarter case for us will be better than the last quarter.

Could you give us numbers? What kind of credit growth are you expecting? Because the industry itself is not shown very good numbers.

Yeah, I can’t give credit growth numbers for the industry. But you saw we gave up eliminate numbers for this quarter. It’s 19 and a half and 22 as deposit. So because we think semi-open rule and semi-urban and rural demand is very point. We feel they’re also depending upon the segments you are operating in. Working capital demand has picked up and so we actually don’t see a problem.

Where is demand coming from? You know RBI data recently showed that credit to businesses that is fallen eighty seven percent. You know is there a demand side problem that you’re seeing at all.

So demand to some extent obviously the banks will fulfil a demand for credit. We can’t create a demand because that will result in NPS. So you have to create a genuine demand that you fund. The RBI data is past period. For future period growth is coming from everywhere.

What has happened in the past will help us analyze?

But maruti is one participant. No, largest one

I just want yes one participant without naming some of the others have picked up. Our lending to what was a picked up.

Now before you say, I’m sounding too optimistic. Let me tell you this, I am saying that with the measure that have been taken with an understanding of the issues that are there there are sufficient steps that should revive them on to a great extent if you expect buoyancy all of a sudden I don’t think I’m saying that but as I said earlier by the first quarter when I’m talking calendar you should see an improvement in GDP.

Okay you know the speed of reforms announced by the government monetary policy is also being supportive with rate cuts you know how much of a game changer have they been ?Especially this last bit of corporate tax cuts that have been announced

You know the big elephant in the room is actually the trust deficit. When we speak of the banking system whether it is all to go, whether it’s DHFL and now the PMC banks crisis you know it is really caused some sort of a trust deficit with customers as well. What do you think isn’t the need of the hour to resolve this issue?

You’ve missed a lot of things. So first, I presume you asked about the trust deficit. Between the bank and bank lending I don’t think that the trust deficit. There always we’ve had people go bad and whether you take I’ll take you or you take PMC this is not the first time. It happened. So I think trust deficit is a bit extreme. We need to review what has happened and put in appropriate procedures. But at this point of time I do believe that for the large banks I don’t think there is a trust deficit and good projects and good proposals are getting loans.

Now starting October 1st you’ve also introduced the reporting dates for retail products or floating products. Have there been any challenges on managing the liability side?

Our retail products are largely fixed. And on the other side I think the Reserve Bank has been very clear that if you think there is a challenge of course there’s a challenger as it is fixed your liability is floating. But this is a much wider challenge. You must understand in the absence of social security there is a limit to which fixed deposit rates can come down. I’m a service officer son and then expect that income every 1% drop their effects his living. So there is a limit to which it can come down. Secondly, in the absence of a derivatives market you can’t cover the risk. So the Reserve Bank set price in your risk. So they priced it.

Okay. Now you hold it from the big banker. Let’s move on to some important data points now. The World Economic Forum has released its global competitiveness index where it has highlighted that India has slipped 10 spots and it has at the 68th position. Ekta is joining us with more details.

Ekta, thanks for that. Well you know just to give you a brief about the Global Competitiveness Index. It is by the World Economic Forum it is a set of factors to determine the economy’s level of productivity. So like you mentioned India in fact has moved down 10 points and India is now 68th position out of a hundred and forty-one economies. Now the report however says that the decline in India’s score is relatively small in terms of points and 0.7 points.  India’s drag drop is despite that relatively stable score. Because, due to faster improvement of lower ranking countries which have exceeded India this time. So for example they’ve mentioned Colombia, South Africa, and Turkey which have improved over the past year. Sri Lanka is eighty fourth place and is the most improved country in South Asia specifically.

Okay, all right. Thanks it’s all very much for getting us the more in depth analysis on those numbers. We need to take a break on that note. On the other side, we’ll have all the commodity market action of the day coming up with Manisha Gupta.

This news has been published in CNBC-TV18 YouTube channel without modifications to the text.