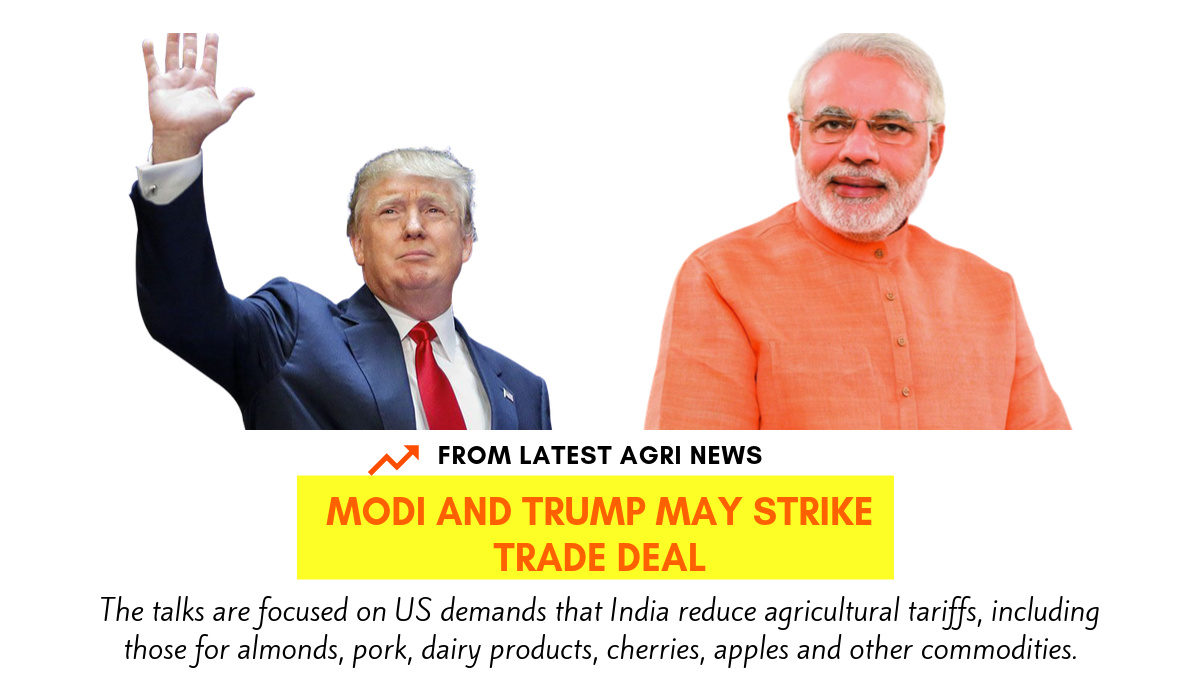 The deal under discussion with India would lower some tariffs on US produce and restore preferential treatment for some Indian exports to the United States, the sources said.

The United States and India are racing to negotiate a limited trade deal that US President Donald Trump and Indian Prime Minister Narendra Modi can sign at the United Nations General Assembly in New York at the end of September, people familiar with the talks said.

A deal between the world’s most populous democracies would be a welcome victory for Trump, whose administration has made little headway negotiating an end to its prolonged trade war with China. Trump is also expected to sign a deal with Japanese Prime Minister Shinzo Abe next week that lowers Japanese farm tariffs.

The deal under discussion with India would lower some tariffs on US produce and restore preferential treatment for some Indian exports to the United States, the sources said.

Trump and Modi will meet this Sunday in Houston at an Indian-American rally dubbed “Howdy Modi!” in a 50,000-seat stadium – a sign of their warming relations, which are contributing to expectations for a “mini-deal”.

“There’s a push to get something done with India, with an eye for UNGA,” said a Washington-based source familiar with the discussions.

Trump has demanded better terms of trade from most of the top commercial partners of the United States and blames previous deals for the loss of millions of US manufacturing jobs.

US-India trade relations have been fraught. Trump has repeatedly complained about India’s high tariff rates, including a 50 percent tariff on Harley-Davidson motorcycles.

The United States has also taken issue with India’s new investment rules on e-commerce that limit how companies like Amazon.com Inc and Walmart-backed Flipkart can do business in a rapidly growing online market set to touch $200 billion by 2027.

“We’ve been talking to the Americans, we have engaged them for many months now,” Indian Foreign Minister Subrahmanyam Jaishankar said at a news conference this week. “My expectation is that some of the sharper edges, they would be addressed in some forms in the not too distant future.”

A US trade representative spokesman did not respond to a request for comment on the US-India talks.

PM Modi, like Trump, has used tariffs to try to boost investment in manufacturing, a key part of his “Make-In-India” campaign to attract foreign cash and create factory jobs for millions of youth entering the workforce.

Apple supplier Foxconn recently expanded the production of iPhones in India to avoid a 20 percent import tariff and diversify its supply chain from China.

The United States in June ended duty-free access for about $5.7 billion worth of Indian exports under its Generalized System of Preferences (GSP) program, including chemicals, plastics, leather and rubber goods, and auto parts. India was the largest beneficiary of the GSP, which was designed to help developing countries that dates from the 1970s.

India responded with higher retaliatory tariffs on 28 US products, including almonds, apples, and walnuts.

The talks are focused on US demands that India reduce agricultural tariffs, including those for almonds, pork, dairy products, cherries, apples and other commodities, people familiar with the talks in both Washington and New Delhi said. India is likely to allow some US dairy imports, the official said. Another Indian official said the United States was pushing India to remove high pricing barriers on imported US medical devices including cardiac stents.

In return, India wants the GSP restored for a few more years, as Modi struggles to boost exports dampened by sluggish global demand made worse by the US-China trade war. New Delhi also wants market access for some of its farm products such as grapes to export to the United States.

The United States is also seeking lower tariffs on high-end electronics products, one of the Indian officials said.

Both sides are discussing revising India’s domestic content rules on ethanol to allow more imports of the US fuel additive, two US sources familiar with the discussions said.

A narrow deal would be a positive first step and leave thorny issues aside such as the new e-commerce rules, said Roger Murry, deputy director of the Alliance for Fair Trade with India, a group of US trade associations.

“We’re hopeful that the Houston events can be bolstered by some real progress on the trade front that shows the US and India can negotiate some reasonable solutions,” Murry said.

This story has been published from India today feed without modifications to the text. Only the headline has been changed.