BlogAgri NewsGlobal Food Security Alert : Covid-19 outbreak could have an significant impact on the agricultural sector as a whole. 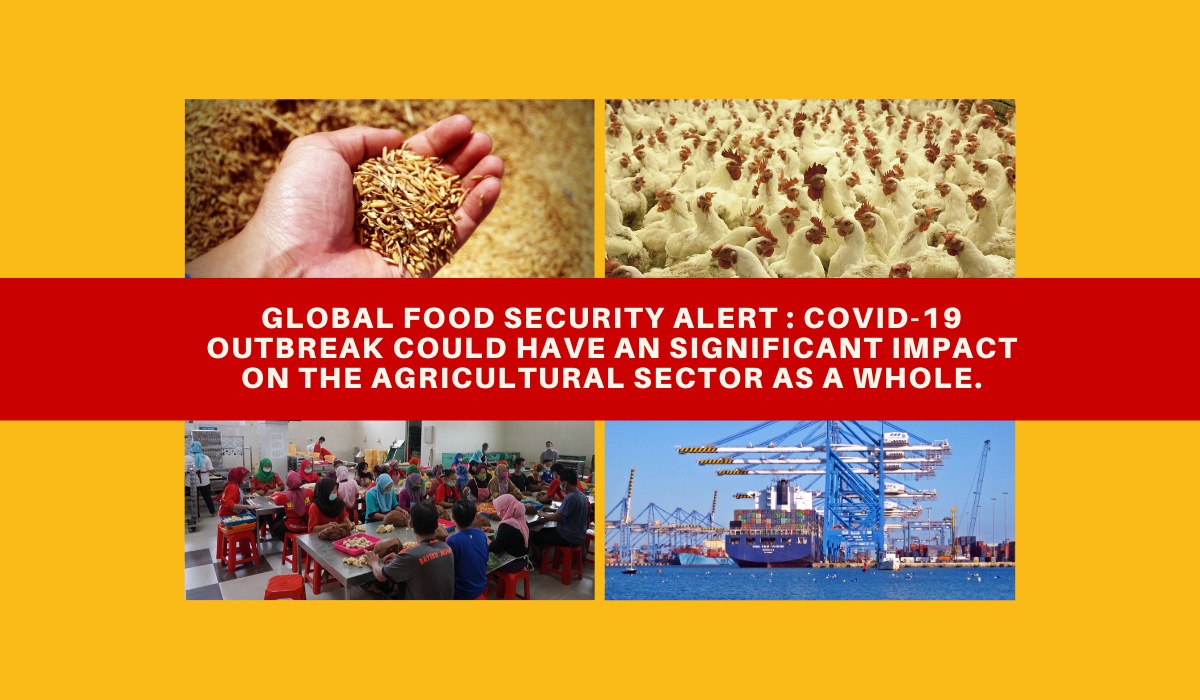 The novel coronavirus pneumonia (Covid-19) outbreak that began in Wuhan, in Hubei province, China has quickly spread to at least 75 other countries, causing more than 3,000 deaths.

China’s subsequent imposition of restrictions on movement both within and outside its borders has been effective in containment: official Chinese data shows  new confirmed cases dropped to 129 in China and only 4 outside of Hubei on March 4. However, rise in the Covid-19 cases across the world increases the risk of disrupting  the global food trade system.

For example, when Ebola began to hit Guinea, Liberia, and Sierra Leone in 2014, domestic rice prices increased by over  30 per cent; the price of cassava, a major staple in Liberia, shot up  by 150 per cent. In 2003, the SARS outbreak triggered food market panics in Chinese cities of Guangdong and Zhejiang.

While food prices have remained stable in Wuhan – and in fact, all over China since the outbreak and supplies of staples, fruits, vegetables, and meats have been adequate despite sporadic reports of price hikes and shortages in isolated locations, there is little room for complacency.

Online surveys by researchers indicate that the poultry industry, already under stress due to inadequate feed supply and interruptions in timely marketing, could begin tightening, and these problems could spread to other industries – creating a food supply hiccup and a threat to food and nutrition security for many.

Let’s assess some of these threats to food security: in the short term, disruptions are unlikely to be severe as food supply has been enough and markets have been stable so far. Restrictions on transportation and movement of people have led to some food logistics challenges.

However, as the lockdown began just before the Chinese New Year holiday on January 25, most Chinese households and businesses had stocked food and built reserves, having little impact on food prices.

The poultry industry, though, may witness additional setbacks in absence of any suitable policy action. Due to a ban on the movement of live poultry, farmers have discontinued selling chickens and eggs in markets, leading some to bury chicks and ducklings alive. Estimates suggest market input of chicken and ducklings has decreased by about 50 per cent.

The impact of outbreak will also spill over to food processing industries, which have suspended production. In 2017, Chinese households consume about 28 per cent of agricultural products directly, while 45 per cent go to food processing industry. The supply of processed foods remains relatively abundant for the time-being, but production may be affected by a manpower crunch and falling demand for agricultural products. One priority is to facilitate migrant workers to return to jobs after the New Year holiday.

Production of staple food crops such as wheat, rice, and vegetables will be affected if the outbreak continues into the critical spring planting period as it is unclear if agricultural inputs can be distributed in time for spring planting. The 2014 Ebola epidemic led to an increase in abandoned agricultural areas and reduced fertilizer use in West Africa. If staple food production is affected, the impact on food security could be grave.

Domestic and international trade disruptions may trigger food market panics. During the 2003 Sars outbreak, panic-buying of food and other essentials hit many places in China. Any panic would exacerbate temporary food shortages, lead to price spikes, and disrupt markets. If left unchecked, food panics can spread and threaten broader social stability.

The epidemic has been largely contained in China with new confirmed cases dropping rapidly. Now, the challenge is to restore economic activities including those in food and agriculture.  The Chinese government is trying to target these problems and has called several important meetings to ensure an ample food supply and tackle logistics for delivering agricultural inputs, emphasising the responsibility of local governors.

Feed production and slaughter enterprises are required to accelerate production to restore and increase the effective supply of livestock and poultry products. They are also receiving production guidance and technical services to strengthen animal and plant epidemic prevention and control. Spring planting is also required to be prepared with adequate inputs and other support.

Comprehensive measures must be taken to make sure the restrictions imposed to control the outbreak will not potentially lead to hiccups in food and nutrition security both in China and globally.

First, based on learnings from previous pandemics and the current situation in China, to prevent any major setback to  food and nutrition security, it will be important to continue to closely monitor food prices and strengthen market supervision, particularly in Wuhan, across Hubei and nearby provinces.

Second, fully restore logistical operations of regional agricultural and food supply chains.  While the government has already moved in this direction by opening a “green channel” for fresh agricultural products and prohibited setting up unauthorised roadblocks, a close supervision would be required for these policies to be effective.

Fourth, ensure the smooth flow of trade and make use of the international market as a vital tool to secure food supply and demand. Global cooperation should be strengthened to avoid disruptions of the global food chains.

Finally, regulation of wild food markets to curb the source of the disease remains essential. Many zoonotic diseases, such as HIV, Ebola, MERS, and SARS, originate from wildlife. Even though the government announced a temporary ban on wildlife trade, temporarily reducing human contact with wild animals, it is important to step up research and design long-term legislation to close the major legal loophole allowing trade in wild animals to avoid future epidemics.

Source: This story first appeared on The Telegraph UK News Feed without any modifications to the text. Only the headline has been changed.