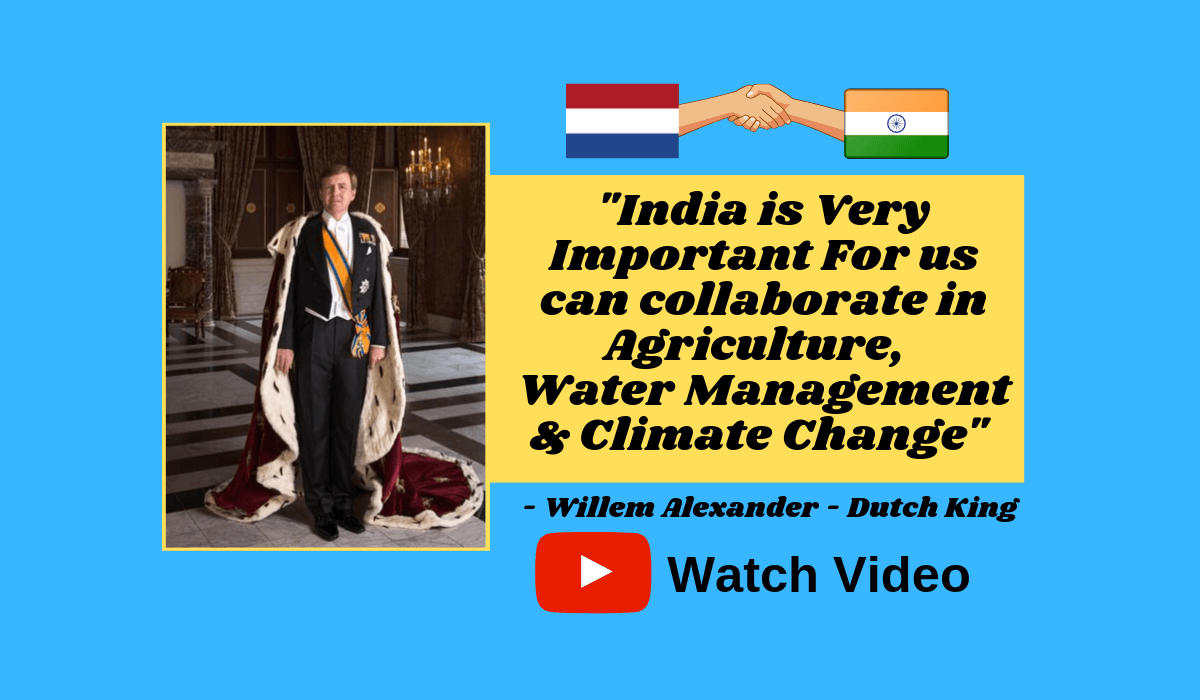 India is very important for Netherlands and can collaborate in agriculture, water management and climate change says Dutch King Willem-Alexander

Dutch King Willem-Alexander has said that India is very important for the Netherlands and said that both countries can collaborate in various sectors including agriculture, water management and climate change.

The Dutch King, who is set to visit India later this month along with his wife Queen Maxima, also described the country as an “amazing place” to do business.

“India is a very important country for the Netherlands. I am very glad that in the long tradition, my wife and I are visiting India in October. India is amazing, its hustle-bustle, they have vibrant technology, innovations and it is an amazing place to do business,” Willem-Alexander, in an exclusive interview, told ANI, on Monday.

He also said that India can help the European country in its efforts to tackle climate change.

“We also have people who believe in a sustainable future of our planet. Indian people know from their religious side, how important the planet is. So they can also help us how to preserve this planet. We can also learn from each other in the fields of agriculture, water management and all different things coming up during the state visit,” said Willem-Alexander.

A book authored by Rajamony titled ‘India and the Netherlands – Past, Present and Future” was released on Monday in Amsterdam at a seminar attended by the King and Queen of the Netherlands.

The first copy was received by Willem-Alexander in the presence of a large number of distinguished guests including the Dutch Minister for Education, Deputy Mayor of Amsterdam and Ambassadors of 26 countries.

The seminar was jointly organised by the Embassy of India and the Royal Asian Art Society in the Netherlands. The event took place at the prestigious Rijksmuseum (National Museum) in Amsterdam.

Replying to another question where some of the facts mentioned in the book came as a surprise, Willem-Alexander said, “Being part of some of the elements in the book, I, of course, was aware of them. There were some very nice surprises and other things that I didn’t know from the preparations from the previous visit to your beautiful country.”

Talking about his upcoming visit to India, the Dutch King said he was looking forward to the trip.

Expressing regret over the UK’s scheduled withdrawal from the European Union on October 31, Willem-Alexander said that Brexit, however, will make the Netherlands become a key entry point in Europe and also for companies from India.

This story has been published in business-standard auto generated feed without modifications to the text. Only the headline has been changed.